If you’re a cat lover, you might find it ideal to be in the company of a cat. But can you imagine that there’re some islands in Japan with more cat residents than humans? Japan is known for the cute, and what could be cuter than cat and kitten faces?

Cat lovers unite! Today I would like to introduce you to the three most famous cat islands in Japan.

Aoshima might be the most famous cat island in Japan. Its nickname “Cat Island” is no exaggeration because there are only 15-20 residents on the island but more than 120 cats, about 6 times the human population!

Aoshima is a 1.6 km long island located in the Ehime Prefecture of southern Japan. Cats were originally introduced on ships because the fisherman had to deal with a rodent problem. But the cats then remained on the island and reproduced, thus the population increasing almost exponentially. 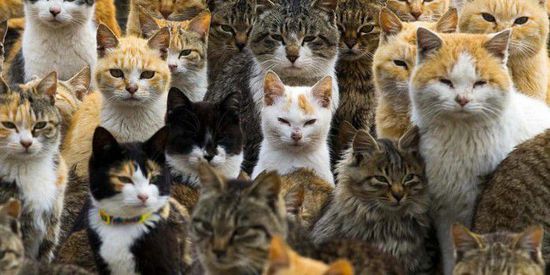 However, Aoshima Island is not a tourist spot. There’re no cars, hotels, restaurants, or even vending machines on the island. Residents there are mostly elders. They won’t turn away the visitors who want to get close to the cats, but make sure not to disturb the residents if you visit the island, and do not feed the cats because they are fed by the residents every day.

It’s not a spot with convenient transportation as only two rounds of ferries go to the island per day. However, it might be a destination to try and visit for the extremely keen cat lovers.

How could you not love that sweet face?

It is recommended that you leave from Matsuyama, the prefectural capital of Ehime:

Tashiro-jima or Tashirojima is another famous cat island in Japan. It is a small island off the mainland of Japan in Ishinomaki, Miyagi Prefecture.

The population in the island is quite small (around 100 people) but there are more than 100 cats on the island. The island used to raise silkworms for their silk which naturally attracted mice, and the introduction of cats helped this production as the cats kept the mice population to a minimum.

It is also believed by the local people who have been doing fishery for years that feeding cats will bring wealth and good fortune. Most people there take care of cats very well, and the cats have become a sort of a mascot for the island. Because of this, no pet dogs are allowed on this island, so the island literally is a "cat island."

In the center of the island, there is a cat shrine called Neko-jinja, situated between two villages, devoted to cats that died due to falling rocks. You really get the sense that the cats are loved here by locals and by visitors to the island.

For Tashirojima, Miyagi, take Ajishimaline (40 min) cruise from Ishinomaki Port and get off Nitoda Port of Tashirojima (2-3 round trips a day depending on season).

Compared with Aoshima Island and Tashiro-jima Island, Enoshima is a destination much easier to access for all the cat lovers out there. It is a small offshore island located in the Southwest of Tokyo and is the closest cat island near Tokyo, about 4 km in circumference in Kanagawa Prefecture, Japan.

It’s also a popular leisure spot for surfing, sunbathing and swimming in summer. When the weather is fine, you might be able to see Mt. Fuji from there. The cat population has increased since 1980. Originally, most of these cats were left abandoned here, but they are now cared for by residents and visitors, as locally and communally owned cats. Because of this, they are very accustomed to people. They don't run away, some of them even approach and look at the people, or investigate to see if you come bearing snacks. Some also are looking for a scratch behind the ears. Just like humans though, cats have their own individual personalities, and may not enjoy pats, so please use caution and heed the rules set by locals.

It’s about 90 minute train ride from Tokyo (get Odakyu line from Shinjuku to Fujisawa/Odawara/Enoshima).

From the Enoshima station it's a pleasant 15 minute walk.

Compared with Aoshima Island and Tashiro-jima Island, Manabeshima is a much smaller island located in Kasaoka City of the Okayama Prefecture. Manabeshima is about a two and a half hour trip from Kasaoka Station, and about 19 miles off the coast of Honshu. It requires getting on a train as well as a ferry to access the island.

Originally a small island with a population of less than 300 people, it became a bit more noticed when a famous French artist featured the island through a book. Manabeshima or Manabe Island however continues to be more known as as island inhabited by cats. A peaceful, residential island creates quite the peaceful life for the cats. Visitors are sure to be greeted by cats wherever they go, in fact, there may be more cats than people! Most of the cats are friendly, but each have their own personality so use caution should you approach them. 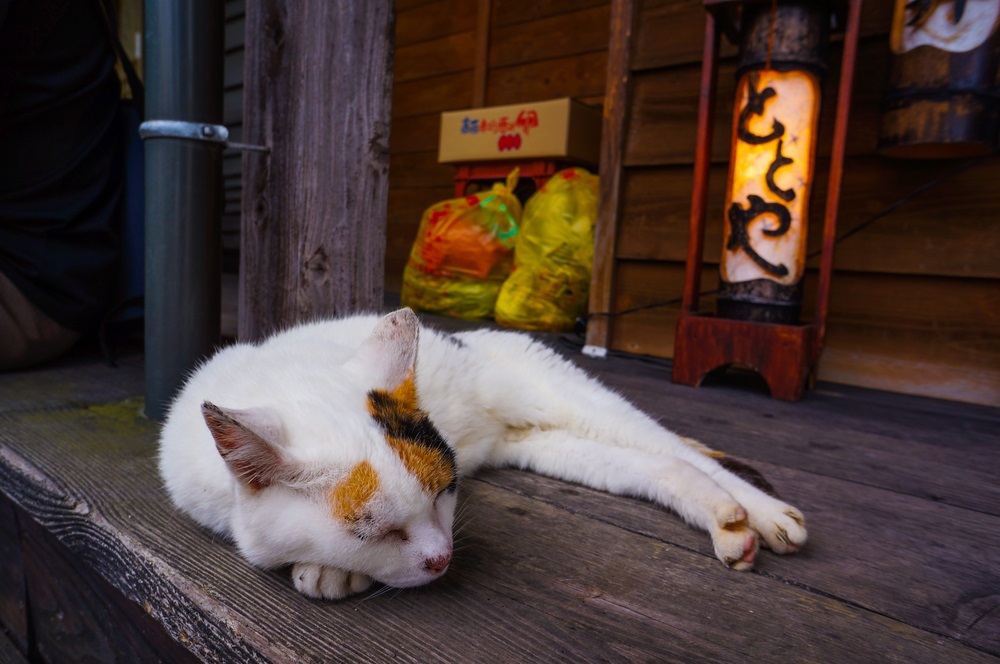 *Enoshima was once our third cat island, but upon reports that Enoshima no longer have cats inhabiting the island in the large population it once had, we have updated our list accordingly. Locals and some visitors to the island have also reported that the cats actually can be spotted higher up the island around the park.

Check out more of our blogs and discover more about Japan here: Destination Japan Blogs

Please note that prices are subject to change due to exchange rate.